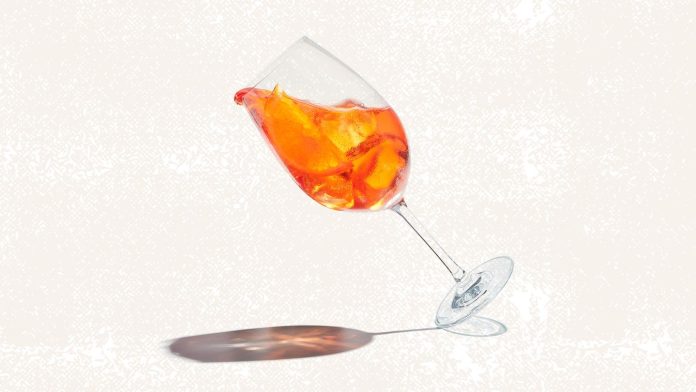 For many of us, alcohol is an automatic part of the social events that punctuate our lives. Booze is a staple at Friday happy hours or boozy brunches or toasts to mark big milestones like graduations or weddings or promotions. And we may not give it a second thought because we’ve heard over and over again that it’s fine to drink in moderation.

The Dietary Guidelines for Americans seem to echo this sentiment that moderate drinking is safe. They recommend no more than two drinks a day for men or one daily drink for women. One drink, the Centers for Disease Control and Prevention notes, could be a 12-ounce (oz) beer, 8 oz of malt liquor, a 5-oz glass of wine, or a 1.5-oz shot of hard liquor like gin, rum, vodka, or whiskey.

These guidelines also caution against heavy drinking and binge drinking — and stress that less is more when it comes to alcohol. Beyond this, the guidelines also emphasize that nobody should start drinking just because they think there might be health benefits.

That begs the question: Is drinking alcohol actually healthy?

“I think it unlikely that any level of alcohol consumption has net health benefits,” says Tim Stockwell, PhD, a substance use researcher and professor emeritus in the department of psychology at the University of Victoria in British Columbia, Canada.

There are decades of research to support this idea, at least as it applies broadly to society at large, Dr. Stockwell adds. But how this applies to each of us as individuals is much more nuanced, with the potential risks and benefits of alcohol consumption influenced in large part by our distinct life circumstances and unique medical histories.

“The most important thing is that people are informed about the nature and scale of alcohol’s risks so they can make their own choices,” Stockwell says.

How Much Do Americans Drink?

In study after study, people who drink in moderation tend to be really different from both teetotalers and heavy drinkers — moderate drinkers are typically wealthier, healthier, better educated, and living in more affluent communities. And both people who abstain and those who binge are typically poorer, less educated, and more apt to have a history of substance use issues or chronic health problems than moderate drinkers. As a result, moderate drinkers may be healthier, independent of drinking status, than people who abstain or drink too much. That can make it hard to understand the extent to which alcohol plays a role in health.

Why Most Alcohol Research Is Flawed

Plus, studies comparing moderate drinkers to abstainers usually have a critical flaw. These studies typically don’t account for the medical reasons that motivate many people to avoid alcohol — like substance use disorders or chronic illness — and may appear to exaggerate the health benefits of moderate drinking as a result. One meta-analysis of 87 studies on alcohol consumption and the risk of premature death, for example, found that the longevity benefits of moderate drinking essentially disappeared after adjusting for this so-called “abstainer bias.”

Another major caveat to most research into the health effects of alcohol is that the vast majority of these studies aren’t controlled experiments designed to prove whether alcohol directly causes specific positive or negative medical outcomes. The gold standard in medical research — clinical trials that randomly assign some people to try an intervention while others join an intervention-free control group — isn’t considered ethical in alcohol research given the potential for drinking to harm study participants. Instead, most of the biggest and most influential studies of alcohol and health rely on asking people about their drinking habits and looking for connections between the amount, type, and frequency of alcohol consumption and a wide range of medical outcomes. This kind of study design creates many biases that make it challenging to show cause and effect, leading to shakier results that can’t be fully relied on.

“Big picture, the data are very clear and consistent that drinking in excess is overall harmful to health,” says Gregory Marcus, MD, a professor of medicine at the University of California in San Francisco, who researches the effects of alcohol on the heart.

But the impact of drinking in moderation isn’t as clear. “The big unanswered question is whether consuming a standard drink of alcohol a day — meaning a glass of wine or a single 12-oz can or bottle of beer or one shot of spirits — is overall better or worse for your health,” Dr. Marcus says.

Similarly, a meta-analysis of data from 34 studies with more than one million participants also found a survival benefit to moderate drinking. In this analysis, men who consumed up to four drinks a day were up to 17 percent less likely to die prematurely, while women who consumed up to two drinks daily had an 18 percent lower risk of premature death.

But another large study that followed 600,000 drinkers over time found that moderate drinking may actually hasten death even when people limit their consumption to one or two drinks a day as recommended by U.S. dietary guidelines. In this study, adults who consumed 7 to 14 drinks a week had a six-month shorter life expectancy by age 40 than people who drank less often.

There is no consensus that moderate drinking leads to a healthier heart.

For example, one of the biggest studies to date (PDF) to examine drinking and cardiovascular health followed more than 1.9 million people without heart disease over about six years to see how alcohol might be associated with their risk of developing heart issues. In this study, moderate drinkers were significantly less likely than abstainers to experience heart attacks, stroke, heart failure, peripheral artery disease, and aneurysms. Moderate drinkers were more likely to have a heart attack than heavy drinkers, however.

Another study of more than 1.1 million people examined the connection between alcohol and heart health much differently — by comparing outcomes based on whether people lived in “dry” counties that banned alcohol sales or “wet” counties that permitted sales without any restrictions. Dry county residents were 7 percent more likely to be hospitalized for atrial fibrillation but 11 percent less likely to be hospitalized for heart attacks compared to people in wet counties.

So again, these findings are mixed.

Some research also suggests that drinking in moderation can be harmful to the brain, hastening structural changes that can lead to dementia, Alzheimer’s disease, and cognitive decline. One study of almost 37,000 healthy adults in the U.K. Biobank, for example, found consuming one or two drinks a day was associated with reduced overall brain tissue volume as well as less gray matter and white matter. Increasing drinking from about a half pint of beer daily to a full pint of beer amounted to aging the brain by about two years, the study found.

Another study that followed roughly 9,000 middle-aged adults over more than two decades found moderate drinking less harmful to the brain than abstaining or heavy alcohol consumption. People who abstained from drinking were 47 percent more likely to develop dementia than moderate drinkers. In addition, people who cut back on alcohol consumption in middle age had a higher dementia risk than adults who consistently consumed moderate amounts of alcohol.

Many studies linking obesity to alcohol consumption clearly demonstrate the negative impact of heavy drinking and binge drinking on body weight. As with many other health outcomes from alcohol consumption, the picture is mixed when it comes to the link between obesity and moderate drinking.

One study of more than 45,000 drinkers found that the total number of drinks each week didn’t necessarily influence weight gain. But the number of drinks people consumed on days they chose to drink did impact their weight. This study documented significant increases in body mass index (BMI) for both men and women who consumed four or more drinks on days they consumed alcohol, as compared with just one drink on those days.

Another study of more than 37,000 adults also linked BMI to the number of drinks consumed per day. “In our study, men and women who drank the smallest quantity of alcohol — one drink per drinking day — with the greatest frequency — three to seven days per week — had the lowest BMIs, while those who infrequently consumed the greatest quantity had the highest BMIs,” says lead study author Rosalind Breslow, PhD, an epidemiologist at the NIAAA who is based in Bethesda, Maryland.

When it comes to cancer prevention, a growing body of evidence suggests that abstaining from alcohol altogether may make a difference. One global study examining alcohol-related deaths over a 26-year period, for example, found drinking associated with a large proportion of these fatalities among adults 50 and older — 27 percent of deaths in males and 19 percent of deaths in females.

In 2020 alone, about 4 percent of all new cancer cases worldwide were attributable to alcohol consumption, or about 741,000 cases, another study found. A few types of cancer — tumors of the esophagus, liver, and breast — accounted for most alcohol-related cases. And while heavy drinking and binge drinking explained the majority of these cancer cases, 14 percent were due to moderate drinking.

Preliminary research reported at a medical meeting earlier this year also suggests that obesity may increase the risk of developing alcohol-related cancers. Researchers examined data on drinking habits and cancer cases among almost 400,000 people in the U.K. Biobank and found that people with the highest BMIs were 53 percent more likely to develop alcohol-related cancer even when they drank in moderation, following dietary guidelines for alcohol consumption.

According to an article published in September 2022 in The New England Journal of Medicine, some doctors are calling for alcohol warning labels, which for decades have stressed the risk of impaired driving and birth defects, to be updated to include the cancer risks associated with drinking, as the American Society of Clinical Oncology outlines.

The Final Word on Alcohol and Your Health

At this point, doctors broadly agree that there’s no good medical reason for people who don’t drink to start drinking. “There are many reasons to drink, but the idea that it will improve your health is on far too shaky scientific ground,” Stockwell says.

There also isn’t enough evidence to suggest that everyone who enjoys a cocktail after work or a glass of wine at dinner needs to stop this for health reasons, Marcus says. There are only certain groups of people who face alcohol-related health risks that are definitive enough to recommend abstention — and this includes people who are at high risk for alcohol use disorders and people with health issues like atrial fibrillation that can be directly exacerbated by drinking. Some people who have a high risk or family history of medical issues linked to drinking like dementia or certain cancers might also wish to abstain or limit alcohol consumption.

“For the general population, I do not believe there is sufficient evidence that the overall risks outweigh the benefits to support recommending against drinking about a drink a day among those that prefer to do so,” Marcus says.

5 ways to walk to slow down ageing and stay young

How to manage chronic migraine: Understand the triggers