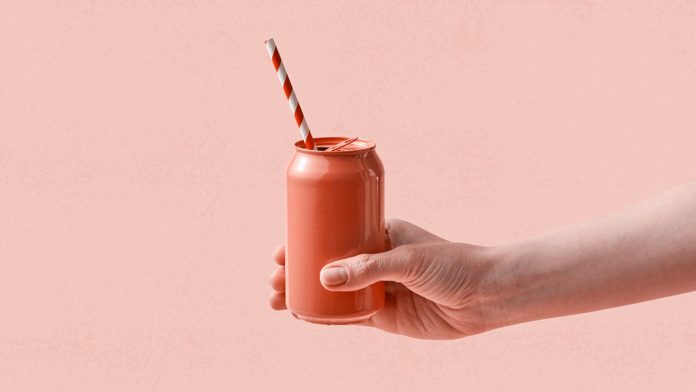 Alcohol might be the original functional beverage — after all, it definitely has certain effects on the mood of whomever’s drinking it. But as more people give up booze because of its harmful health effects, new kinds of supposedly mind-altering drinks are taking its place. Sometimes called euphorics, or adaptogenic drinks, these beverages contain a cocktail of herbal and plant-based ingredients — from ginseng to cannabidiol (CBD) and more — and they make claims about increasing mental alertness and energy or helping you relax.

They stand out with eye-catching packaging and equally dramatic marketing — one brand is called Psychedelic Water and has an iridescent label — but do they actually have the mind-bending powers they claim they do? We asked experts to weigh in on whether these new drinks are actually healthy or not, and what you should know before you try them.

Adaptogens are nothing new. The term was first coined in 1947 by Nikolay Vasilievich Lazarev, MD, a Soviet and Russian scientist and toxicologist, according to the European Medicines Agency. The name is fitting: It refers to herbs and other plant materials that help the human body adapt to stress. Uma Naidoo, MD, director of nutritional and lifestyle psychiatry at Massachusetts General Hospital in Boston and author of This is Your Brain on Food, describes adaptogens as nutritional shock absorbers for the body.

“They can enhance physiological processes toward homeostasis — balance — over time, or as the body becomes ‘adapted,’” Dr. Naidoo says. “Many people turn to adaptogens as a more natural way to manage ailments including stress, fatigue, and poor sleep.”

You’re probably already familiar with some adaptogens. Many have been used for thousands of years. The native Asian plant ginseng, for instance, has long been used for a variety of health purposes in Chinese and Korean cultures, according to the National Center for Complementary and Integrative Health (NCCIH).

“While adaptogens have been used in Eastern medicine for a very long time, it’s a new way of saying ‘dietary supplement’ in American lingo,” says Debbie Petitpain, RDN, a South Carolina–based media spokesperson for the Academy of Nutrition and Dietetics and CEO of Synergy Health Tech. “Many of us need all the help we can get to feel more energetic, less stressed, not quite as grumpy or ill-tempered. Reaching for a product on the shelf that’s going to do that is very appealing to the consumer.”

What Are Some Adaptogenic Ingredients?

The NCCIH lists dozens of herbs that have been shown to have positive effects on health. Some of the most popular botanicals include:

Hemp Not marijuana, which, while gaining legality in many states, is still illegal to sell or use at the federal level. Here, we’re talking about cannabis with low to no tetrahydrocannabinol, or THC (that’s the part that gives you a high). Cannabis has been used for thousands of years for a variety of health concerns, including rheumatoid arthritis, some cancers, and sleep disorders. A review published in Molecules in 2020 noted that most of the research into the health benefits of industrial hemp has been conducted under preclinical conditions, and it called for more research to be done on hemp’s benefits for medical and nutritional purposes.

CBD One of the more than 100 compounds identified in the cannabis plant, CBD is a hot newcomer to the adaptogen scene. It’s the main compound in cannabis that doesn’t get you high — but research has shown that it may reduce anxiety (although at a much higher dosage than you’d get in a 12-ounce can of sparkling water) and improve sleep. The first wave of research into CBD’s potential health benefits came in the 1960s. Since then, the research has grown, but there’s still a need for more, especially in humans.

Is adding the isolated CBD to a beverage more beneficial than adding overall hemp extract? That’s tough to say, says Petitpain. “Is it better for your body overall to eat the carrot or just the beta-carotene from the carrot?” she asks. “The research in this area is still emerging, whether you’re talking about carrots and beta-carotene or CBD and hemp. We just don’t know yet.”

It’s also important to know that the CBD products used as dietary supplements, such as CBD seltzers, are not regulated by the U.S. Food and Drug Administration (FDA). Many such products on the market have been found to contain significantly less CBD than they claim, prompting warnings from the FDA.

Other popular adaptogens include:

In addition to adaptogens, some of these beverages and supplements also claim benefits from probiotics (beneficial bacteria already found in the gut) and prebiotics (the carbohydrates from plant fibers that help probiotic bacteria thrive). Adaptogens don’t affect your gut microbiome — rather, these herbs, mushrooms, and other plants claim to have an effect on your mood or mind. They may offer other health benefits as well, but they’re not bacteria-focused.

What Are the Risks of Adaptogenic Drinks?

There is a tendency to regard adaptogens as safer than prescription medications, even though they are not regulated as well and, according to the NCCIH, “research has demonstrated that these products carry the same dangers as other pharmacologically active compounds.”

Some past research has found that certain adaptogens may interfere with certain medications. The NCCIH does point out, however, that there has not been a lot of research into the interactions of common herbals and prescription drugs, so such claims have not been proven to be a widespread concern.

Still, if you’re taking any prescription meds, it is best to speak with your primary healthcare provider or a registered dietitian before adding adaptogens to your diet.

It’s also important to remember that these are beverages, so they’re not regulated like medication. They’re food, which means they’re safe to consume, but they are not guaranteed to provide the health benefits they claim.

When considering CBD or hemp beverages, Petitpain notes that not everyone reacts the same way to these adaptogens. “The issue right now is that there is a wide variety of reactions to it,” she says.

And adaptogenic sparkling water can be expensive — more than $2 a can, or nearly $5 a can (or more) when featuring CBD. “It’s better to spend that money on food — like fruits and vegetables,” Petitpain says. “A gym membership or even a nutritionist or psychologist just may be a better use of those dollars.”

Should I Try Adaptogenic Drinks?

Unless your doctor notes a possible interaction with one of your medications, there’s likely no harm in trying these sparkling beverages. They’re not a substitute for a healthy diet, but the sparkling water itself is hydrating. Think of them as an addition to a healthy lifestyle, not a replacement for one.