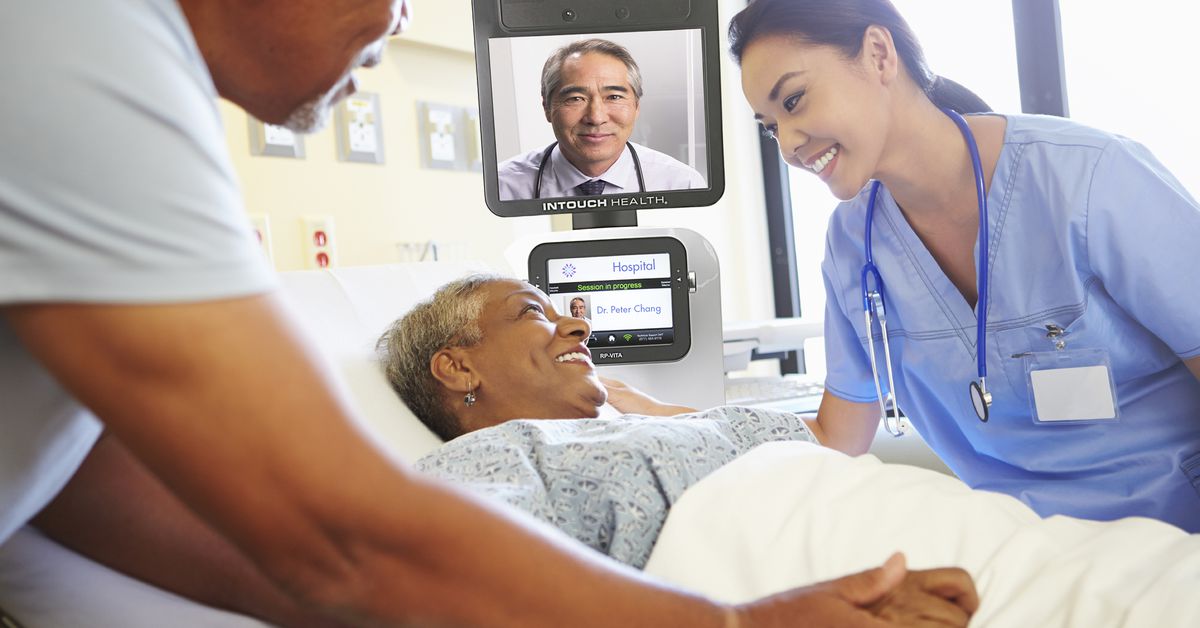 A doctor speaking through a telepresence robot in California gave a dying patient and his family devastating medical news, raising questions about when the convenience of telemedicine should be skipped in favor of a face-to-face conversation.

According to KTVU, Ernest Quintana was in the intensive care unit of the Kaiser Permanente Medical Center in Fremont, California, when a doctor on a video screen told Quintana that he wasn’t likely to survive. “We knew that this was coming and that he was very sick. But I don’t think somebody should get the news delivered that way. It should have been a human being come in,” Quintana’s granddaughter Annalisia Wilharm told KTVU.

What’s more, Quintana reportedly couldn’t hear the on-screen doctor clearly, so Wilharm had to communicate what the doctor said to her dying grandfather herself. “That’s not something you want to ask the loved one of a patient to do in that kind of situation,” Alex John London, a Clara L. West professor of ethics and philosophy at Carnegie Mellon University, told The Verge in response to the KTVU story. “It created a real distance between the family and the clinician, which, instead of the empathy that you want out of this kind of interaction, further depersonalized it.”

Michelle Gaskill-Hames, senior vice president and area manager of Kaiser Permanente Greater Southern Alameda County, expressed Kaiser Permanente’s condolences for the family. But she contested the use of the term “robot” to describe the device that the doctor used to speak to Quintana, which she called “inaccurate and inappropriate” in an emailed statement to The Verge. “This secure video technology is a live conversation with a physician using tele-video technology, and always with a nurse or other physician in the room to explain the purpose and function of the technology,” Gaskill-Hames says. Previous posts on the organization’s websites and YouTube channel did, in fact, refer to the technology as a robot.

But quibbling over the word “robot” is beside the point: the point is that Quintana, who died last week, spent some of his last moments interacting with a person through a screen rather than face-to-face. Gaskill-Hames says Quintana and his family had interacted with physicians in person before the telepresence robot rolled in, which Wilharm confirmed to CNN. But the family’s clear distress over the interaction highlights the pitfalls of using this technology when caring for someone who’s dying.

That doesn’t mean “tele-video technology,” as Gaskill-Hames called it, is always the wrong approach. “I think there are other uses that wouldn’t be so morally problematic,” London says. For example, telemedicine could be a good way to bring specialists and medical expertise to resource-limited and remote clinics. “But that kind of system really should be used to interface with other clinicians,” he says. And if doctors do interact with patients this way, he says, “people should be prepared for what that involves.”

The Verge spoke with London, who is also the director of CMU’s Center for Ethics and Policy, about telepresence robots in medical care and when they are, and aren’t, appropriate.

This interview has been edited for clarity and brevity.

What are the ethical issues of using a telepresence robot in this context?

There are several things that were disturbing in this context. Health care environments, in general, are workplaces for the people who work in them. So they’re very familiar to medical personnel, but they’re often very foreign and very frightening to patients who are going there because they’re in an emergency or they’re in extremis. So there’s a lot of uncertainty, heightened emotional feelings, stress. And part of what you count on in the doctor-patient relationship is for there to be a human there to show compassion, give you some reassurance, and maybe also to have empathy with you while they’re giving you bad news.

Should telemedicine or telepresence robots ever be used to deliver this kind of news to a dying patient?

A scenario I can imagine that would be very different is a patient who had a long-standing relationship with a particular clinician, and that particular clinician was out of town. And the patient came into the emergency room and had some tests done and had the option of requesting that the news be delivered by their clinician. And then they were told, “We can make that happen, but it would have to be through this telepresence robot.”

In that situation, where there’s a prior relationship and a pre-existing bond between the patient and the caregiver, then a telepresence device could be seen as a good way of linking those two people back together so they can have a delicate and emotionally difficult conversation. The impersonal features of the telepresence robot would be made up for by the fact that there was an existing relationship. But if there was no prior relationship or a patient wasn’t told that they were going to be interacting with a person through this medium, I don’t see anything valuable or good that can come from using a telepresence setup rather than an in-person one.

Are there contexts in which telepresence devices might be an appropriate part of a medical team?

I can imagine that kind of telepresence robot being a useful addition when you have rural settings or places where you don’t have expertise on staff that you need to bring in for medical consultation. You could use your telepresence robot to beam in a specialist who would then consult with the care team. That seems perfectly reasonable. But what I’m saying is now you’re bringing in a specialist who would interface primarily with the care team. Would it be okay for a specialist to go on rounds with the care team via a telepresence vehicle? If there was no alternative, in a very remote location. But then I would also want to know how you are preparing patients for the fact that one of the people that they’re going to be encountering isn’t going to be there in person, that they’re going to be mediated through this device.

How does this connect to patient fears?

This is exactly what people are afraid of. People are afraid that compassion in the health system and human-to-human relationships are going to be replaced with sanitized, mechanized, factory-medicine — where information is delivered without compassion, where people are left to their own devices to deal with the human element of birth, death, sickness, disease.

My worry is that now the public’s first introduction to telepresence robots in medicine is going to be an inappropriate use of that technology in a way that was scarring to this family. There might be other contexts in which this technology could be used to expand the resource base in places that don’t have a lot of resources or that are very remote or to connect other people who have prior relationships.