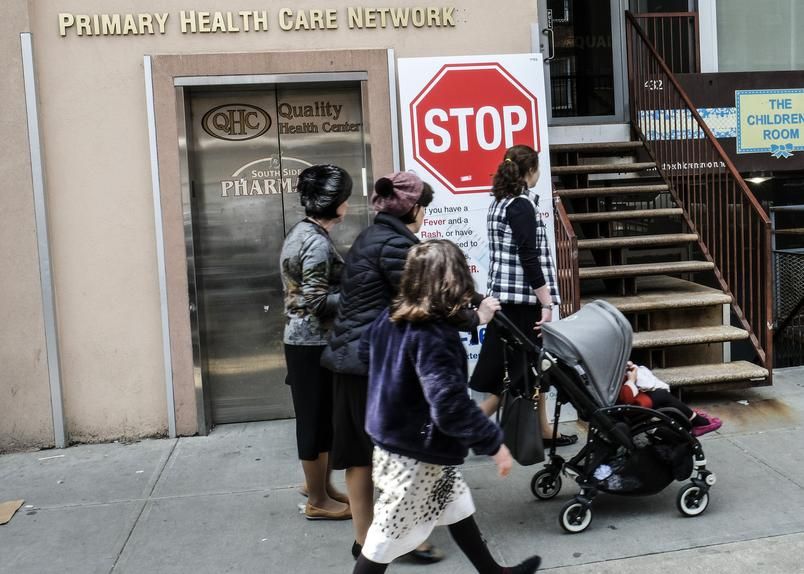 The majority of measles cases this year are in Orthodox Jewish communities in Brooklyn and Rockland County, N.Y.

In 2017 it was a Somali community in Minnesota. In 2014 it was the Amish in Ohio. This year, it is Orthodox Jewish communities in New York and Eastern Europeans in Washington state.

Insular and close-knit religious or cultural groups have seen some of the worst measles outbreaks in the U.S. in recent years.

About 75% of measles outbreaks over the past five years—defined as three or more linked cases—took place in such tightknit communities, says Nancy Messonnier, acting director of the CDC’s Center for Preparedness and Response, and an expert on immunization and respiratory diseases. Such groups share the same culture and are often somewhat isolated from the larger community. 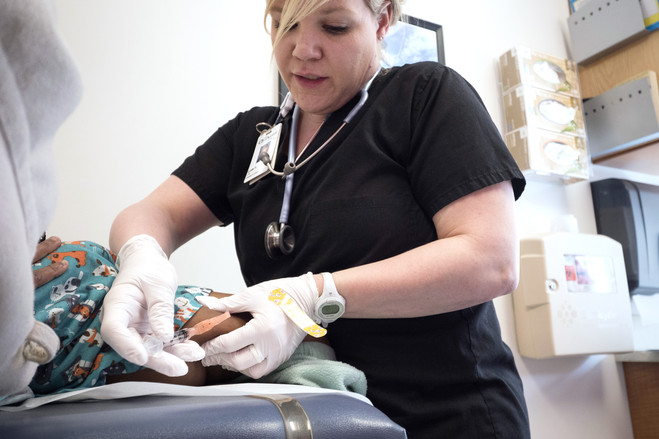 Medical staff set up a vaccination clinic in Minneapolis in 2017 after a measles outbreak there largely affecting the Somali population, which was very wary about the MMR vaccine.

The outbreaks have been in communities where there is “distinctly lower vaccination coverage” and “they have lots of interactions with each other,” says Dr. Messonnier.

The MMR vaccine protects against measles, mumps and rubella. The CDC recommends children get it by age 1 and then a second dose between ages 4 and 6, though people of any age can receive the vaccine. This year there have been 465 reported measles cases in 19 states, according to the CDC.

Measles—among the most contagious diseases—has been eliminated in the U.S. since 2000. So the disease is introduced from someone traveling outside the country or visiting from another country. “In each of these communities the reasons behind under vaccination are different but in every one of them it’s a mixture of a lack of understanding of the risk of measles and concerns about the safety or effectiveness of vaccines,” says Dr. Messonnier.

It’s important to understand what issues are driving vaccine refusal or hesitancy in each community and then respond accordingly, she says. With the Amish, there appeared to be a lack of understanding of the risk of measles, she says. With the Somalis in Minnesota, it was a fear of the MMR vaccine causing autism, despite multiple studies proving it doesn’t, experts say. With Eastern Europeans in Washington state there is a distrust of government and its motives to get people vaccinated, say community members there.

Experts often point to the coordinated effort to turn the tide in the Somali community in Minnesota as a vaccine success story. But state health officials say vaccination rates are still a struggle there. 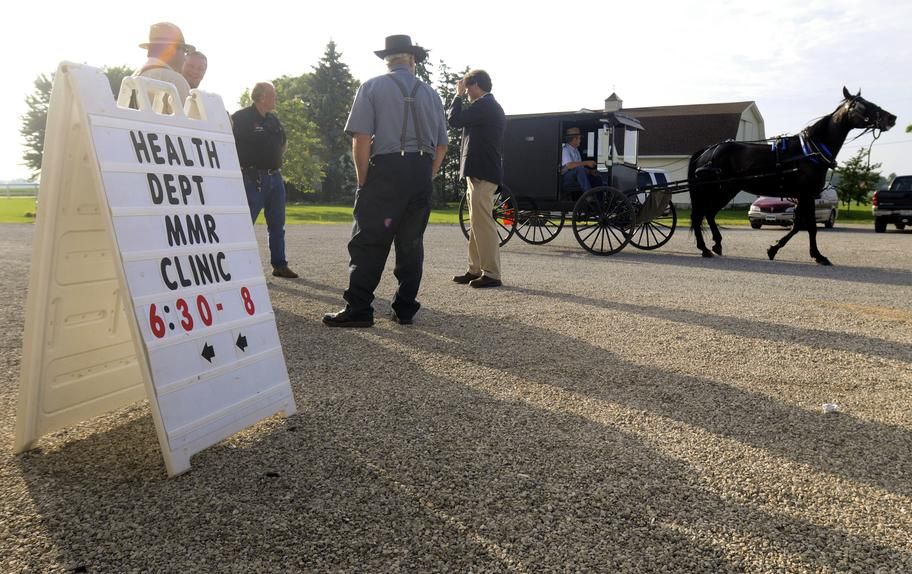 MMR vaccine rates in the community, once more than 90% in 2004, had dropped to a low of about 42% by 2014, which experts attribute to antivaccine groups claiming a link to autism, which resonated with the Somali community because of a perception of high autism rates.

A 2017 measles outbreak affected 75 people in the state, and 61 of them were from the Somali community, says Kris Ehresmann, director of infectious disease at the Minnesota department of health.

The state’s health department and Children’s Hospital Minnesota worked with local imams, mosques and day cares in the community to encourage vaccination.

“We have had staff who have provided correct information but it’s really very challenging,” says Ms. Ehresmann. “Where it does make a difference is when staff are able to have one-on-one conversations. In terms of scalability, that’s really challenging.”

Siman Nuurali, a quality and patient safety specialist at Children’s Hospital Minnesota, is from Somalia and was actively involved in outreach efforts during and after the 2017 outbreak. She said they tried to turn the strategy from saying “the MMR vaccine doesn’t cause autism,” to a dual strategy where they encouraged the importance of getting children vaccinated and talked about the challenges of having a child with autism and getting them the help they may need.

But Ms. Ehresmann says despite their efforts, the MMR vaccination rate of Somali children born in 2015, the most recent data available, is only about 58%.

“I have heard that some people are going back to baseline in their thinking,” she says. “We remain in a position to have another outbreak.”

In Ohio, when a measles outbreak hit an Amish community in 2014, they were willing to get the MMR vaccine when they saw the effect the disease was having, says Michael Brady, associate medical director at Nationwide Children’s Hospital in Columbus. The issue wasn’t the vaccine, he says, but their philosophy of not accepting anything from the government.

In Washington state where a measles outbreak has been contained, advocates and health experts say there is documented vaccine hesitancy in the Ukrainian and Russian-speaking populations.

Tetyana Odarich, a family medicine physician in Portland, Ore., sees many patients from the Ukrainian and Russian community in the area and says roughly half don’t want to get their children vaccinated.

She ends up signing exemption forms to allow many of them to attend school but says she always makes sure to warn them that their child could die without getting the vaccines.

What strategy do you think public health officials and doctors should take when trying to encourage vaccine hesitant parents to vaccinate their children? Join the conversation below.

She says a distrust of the motives of the government and doctors seems to be driving vaccine refusal. “They think it’s a way for the government to make a profit,” says Dr. Odarich, as well as herself. “People from the former Soviet Union have a very difficult time understanding the difference between me, government and insurance.”

When the outbreak happened in January, there was more interest in getting the MMR vaccine, she said. But already it has stopped, she says.

The Washington state Department of Health said the outbreak was caused by a child who arrived in Clark County from another country and had close contact with several community groups with low or no vaccine rates. The department said the strain in the outbreak was the same one causing an outbreak in Eastern Europe adding that the measles outbreak is about unvaccinated children, not specific communities or ethnic groups.

Research on how to change the minds of vaccine-resistant parents is ongoing, but experts say with such diverse populations there isn’t a one-size-fits-all approach.

Sean O’Leary, a pediatric-infectious-disease specialist at the University of Colorado Anschutz Medical Campus and Children’s Hospital Colorado in Aurora, says his research has looked at the use of motivational interviewing techniques with vaccine-hesitant parents. The technique involves using active listening, open-ended questions in trying to sway parents scared about vaccines.

A study he published last year in JAMA found that health-care providers trained in motivational interviewing had a 10% increase in HPV vaccination rates than those that weren’t.  He is now working on a similar study looking at the primary series of vaccines for infants, including the MMR vaccine.

Researchers are also looking at intervening earlier, when women are pregnant. Dr. O’Leary is working on evaluating the effect of training obstetricians to talk with pregnant women about vaccines.

In a 2017 study in the journal Pediatrics, Dr. O’Leary and co-researchers found that expectant parents exposed to a website with vaccine information and an interactive social media component, such as chat rooms, were about twice as likely to vaccinate their children later compared with those with access to the website only and those who just had the usual care.

Douglas Opel, an associate professor pediatrics at the University of Washington School of Medicine, says his research published in a series of studies has found that initiating vaccines in a presumptive format—presuming a parent is going to be fine giving their child vaccines—is effective.

“We need to be able to not only communicate our recommendations about what the child is due for but when parents resist be able to have techniques that make parents feel validated and that their questions are addressed,” says Dr. Opel.

This must be delivered in an honest, transparent, empathetic way and most providers haven’t been trained to do that, he says.

“Vaccine hesitancy is a modifiable behavior,” he says. “While parents may not agree to vaccines at the initial visit, over time they potentially will.”

Write to Sumathi Reddy at sumathi.reddy@wsj.com