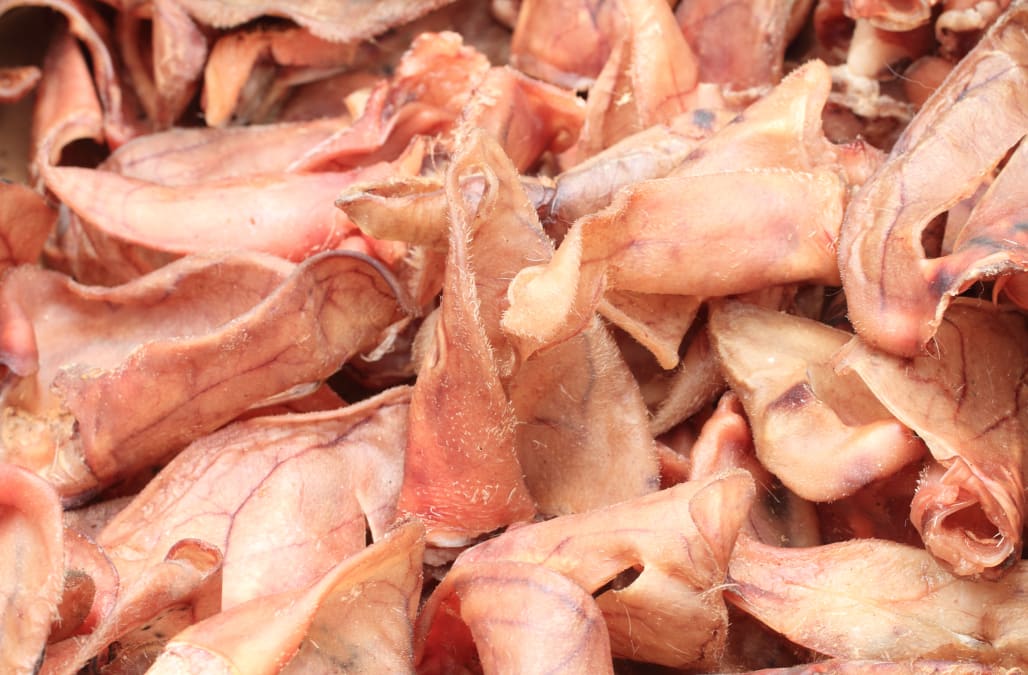 A multidrug-resistant salmonella outbreak tied to pig-ear dog treats has now spread across 27 states, according to a new Centers for Disease Control and Prevention (CDC) report.

The report, released Tuesday, said that 93 people in total have been infected by the bacteria, including 20 who had to be hospitalized. No deaths have been reported so far.

The pig-ear treats, which were sold in open bins at Pet Supplies Plus stores, were first recalled earlier this month after a possible link between the product and salmonella outbreak was first discovered. At the time of the initial recall, the outbreak involved just 45 people in 13 different states. It has effectively doubled since then.

The exact source of the outbreak is still unknown, and the CDC said its investigation is ongoing. In the meantime, anyone who purchased pig ear treats from Pet Supplies Plus should throw them away in a secure container, according to the CDC.

The CDC warns that salmonella, a bacterial disease, can cause illness in both humans and dogs. Common symptoms include diarrhea, fever and stomach cramps.

The outbreak comes just weeks after the U.S. Food and Drug Administration recalled more than a dozen brands of pet food over concerns they were causing a spike in heart disease among dogs.

11 warning signs of cancer in dogs

If your dog collapses, get to the vet immediately. Collapsing, weakness, and general lethargy (not greeting people at the door like usual or less interaction) are common signs of cancer, says Jake Zaidel, DVM, of Malta Animal Hospital in upstate New York. “I see this particularly in large breed dogs—even if they fall down and seem better the next day, bring them in because it could signal a tumor of the spleen,” says Dr. Zaidel. And don’t miss these 10 silent signs that mean your pooch is actually sick!

Coughing doesn’t automatically signal cancer; for example, small breed dogs tend to develop coughs because they have windpipe problems. “If the dog coughs once or twice, it’s of no concern, but if it continues to cough for more than a few days, that’s a concern and could signal lung cancer,” says Zaidel.

Weight loss is the number-one dog cancer symptom Dr. Zaidel says he sees. It’s often the sign of a gastrointestinal tumor. “I’ve had a lot of dogs stop eating because of gastrointestinal tumors, so they lose weight very rapidly,” he says. Cancer can also cause dogs to lose weight while maintaining their regular appetite. If you notice your dog shedding pounds, either rapidly or slowly, make an appointment with your vet. Make sure you know the surprisingly common dog dangers that lurk in your backyard!

Sores, lumps, a strange odor, bleeding, or a change in gum color can be a sign of oral cancer, particularly in older dogs. This cancer sign in dogs often goes unnoticed for too long. “We commonly find visible oral tumors because people don’t examine their pet’s mouth,” says Dr. Zaidel. “Many oral tumors can be really devastating because people don’t find them until it’s really advanced.” He also suggests brushing on a regular basis.

It’s a good idea to watch when your pet yawns or eats, advises Timothy Rocha, DVM, an oncology specialist in New York City. See a vet if you notice something out of the ordinary.

Nosebleeds are never normal, says Dr. Rocha. “With an older dog, a nosebleed is particularly worrisome. It can be a sign of cancer in the nose,” he says. “With younger dogs, I would worry more about something like a foreign object stuck up there before cancer.” (These are the 12 common foods that could be detrimental to your dog’s health!)

Diarrhea or changes in bathroom habits

Occasional diarrhea usually isn’t a sign of cancer in dogs, says Dr. Rocha, but if it persists or gets worse, get your dog to the vet. Constantly begging to go out to go to the bathroom, difficulty peeing/moving bowels, vomiting, or blood in the urine or stool are also potential dog cancer symptoms, according to PetMD.com.

Persistent discharge from the nose or eyes is cause for concern, says Dr. Zaidel. Nasal discharge is a common sign of facial tumors, and eye discharge can signal an eye tumor. (Check out these 23 facts about animals that are actually all wrong!)

Seizures can be a sign of brain tumors and are typically seen in older dog cancer patients, says Dr. Zaidel. If you start to notice sudden and uncontrolled bursts of activity, like champing and chewing, jerking of the legs, or foaming at the mouth, your dog could be experiencing seizures and you should see a vet immediately, according to WebMD.com.

“Every lump, bump, or skin change should be checked,” says Dr. Zaidel. “It could be benign or cancerous, but it’s always easier to treat the earlier it’s caught.” Feel for bumps, lumps, or swelling as you pet your pooch. If you notice something iffy, don’t delay—there’s no way to distinguish between a lump that’s benign or malignant without taking a sample. Also pay attention to any sores that won’t heal or lesions that seem itchy or painful. Also, don’t forget to keep an eye out for these dog flu symptoms.

Sudden weight gain or bloating can be a sign of cancer in dogs. If your dog is eating less but seems to be bulking up, take a trip to the vet, says Rocha. A sudden spike in appetite also warrants a visit.

“Pain is a rather substantial sign of cancer,” says Zaidel. If your dog whines or cries out when you pat her tummy or pick him up, call your vet. Mouth tumors may cause noticeable discomfort when eating. (Keep your pet safe and learn which 11 household items can make your furry friend seriously sick!)

Carrie Underwood on the one thing that boosts her mental health