Man reveals how he lost an amazing 10 stone on the keto diet – what did he eat? – Express 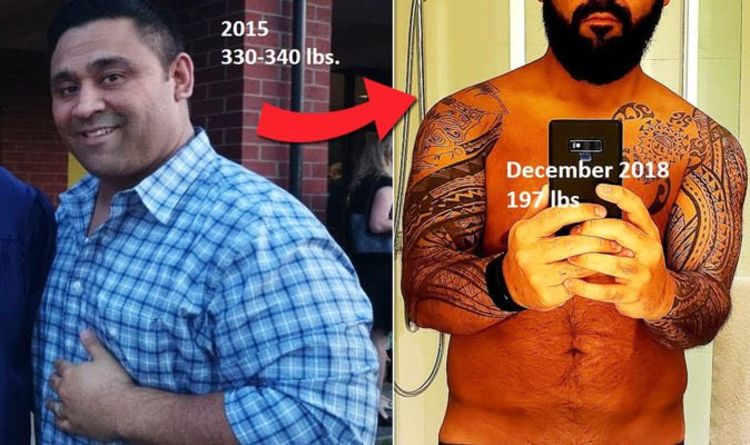 A 43-year-old man has shared his incredible weight loss success on the keto diet plan.

Sharing his before and after pictures on Reddit, he wrote a detailed account of how he did it.

The man slimmed down from 24.2 stone to 14 stone at his lowest weight.

Another man recently lost 13 stone on a similar weight loss plan, so what is it?

The Reddit user turned to the keto diet, or the ketogenic plan, to lose the weight.

The keto diet is a low-carb plan that advocates eating high amounts of fat.

It is devised to trigger ketosis, which is when the body uses fat as its primary fuel instead of carbohydrates.

Carbohydrates are foods that are broken down into sugar glucose in the body. Examples include refined sugar, but also bread, pasta, potatoes and carrots.

So, how did this man begin his impressive weight loss diet?

He told interested internet users: “So sugar was cut first, Fall of 2017, and I lost about 30lbs., just cutting sugar.”

He then went on to embrace the full high-fat plan later. He wrote: “I began Keto July 2018. I downloaded a Keto app and plugged in my goals. This provided my macros.

“Then I also downloaded the My Fitness Pal app to figure out the dietary info numbers and whatnot for my favorite (sic) items. i.e. bacon, steak, chicken breast, breakfast sausage…etc.

“And then you know what…after a couple months, I stopped tracking it all. I kept the apps handy if I ever needed to check a food.”

He revealed that he lost weight incredibly fast, losing over 100 lbs in six months.

Reflecting on the change, the man wrote: “That feeling of letting go of the old me, and rebuilding a new improved me. WOW.

“I’ve been my weight for a while now, but still light up when I go into a store and think to myself “Oh yeah…that’ll never fit.” and then BAM! All smiles.”

IF stands for intermittent fasting, which is a diet plan that seems followers eat all their calories for the day in a small window of time.

For example, they might fast for 16 hours a day, including the hours in which they sleep, and only eat in the remaining eight hours.