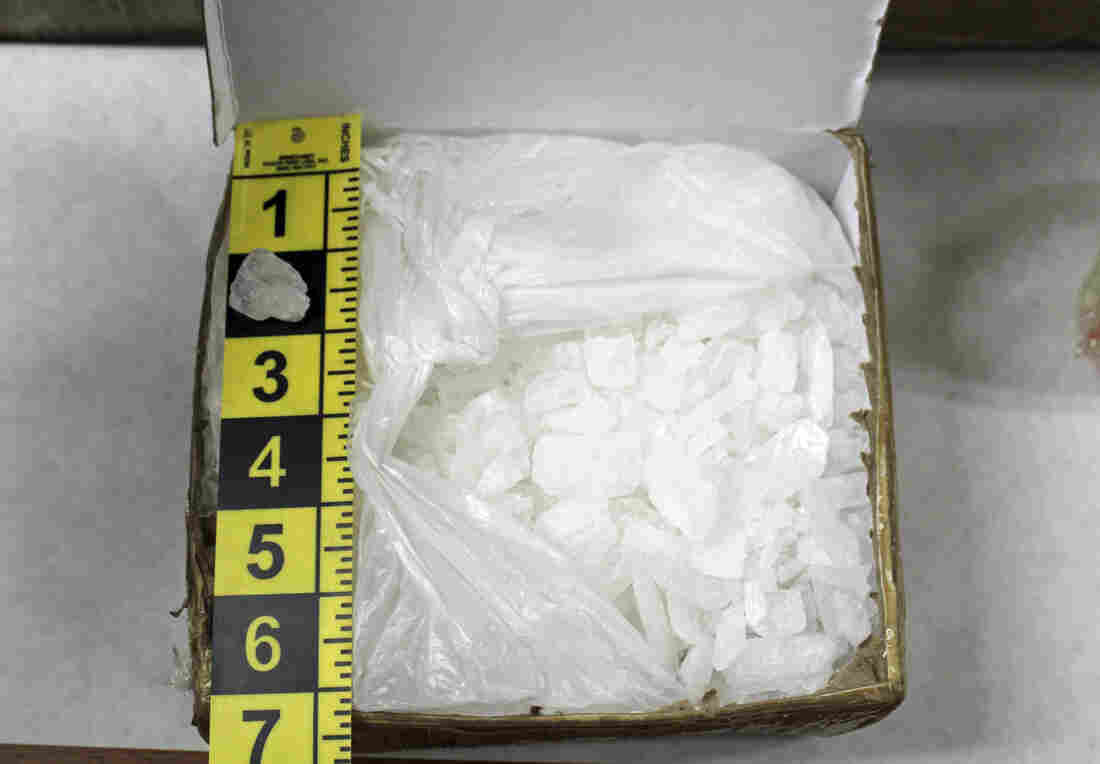 Drug agents last fall worked with a Minneapolis police SWAT team to seize just under 171 pounds of methamphetamine. Many U.S. states say they face an escalating problem with meth and drugs other than opioids.

In his 40 years of working with people who struggle with addiction, David Crowe has seen various drugs fade in and out of popularity in Pennsylvania’s Crawford County.

Methamphetamine use and distribution is a major challenge for the rural area, says Crowe, the executive director of Crawford County Drug and Alcohol Executive Commission. And opioid-related overdoses have killed at least 83 people in the county since 2015, he says.

Crowe says his organization has received just over $327,300 from key federal grants designed to curb the opioid epidemic. While the money was a godsend for his county, he says methamphetamine remains a major problem.

I don’t need more opiate money. I need money that will not be used exclusively for opioids.

And here’s the hitch: Crawford County, which lies south of Lake Erie, on the Ohio state line, can’t use the federal opioid grants to treat meth addiction.

“Now I’m looking for something different,” Crowe says. “I don’t need more opiate money. I need money that will not be used exclusively for opioids.”

The federal government has doled out at least $2.4 billion in state grants since 2017, in hopes of stemming an opioid epidemic that killed 47,600 people in the U.S. in that year alone.

But state officials note that drug abuse problems seldom involve only one substance. And while local officials are grateful for the funding, the grants can be spent only on creating solutions to combat opioids, such as prescription OxyContin, heroin and fentanyl.

Even just the moniker — ‘the opioid epidemic’ — out of the gate, is problematic and incorrect. This was never just about opioids.

According to the most recent data from the Centers for Disease Control and Prevention, 11 states — including California, Pennsylvania and Texas — have reported that opioids were involved in fewer than half of their total drug overdose deaths in 2017.

Also, the federal cash infusion is guaranteed for only a few years, which throws the sustainability of the states’ efforts into question. Drug policy specialists say the money may not be adequate to improve the mental health care system. And more focus is needed on answering the underlying question of why so many Americans struggle with drug addiction, they say.

“Even just the moniker — ‘the opioid epidemic’ — out of the gate, is problematic and incorrect,” says Leo Beletsky, an associate professor of law and health sciences at Northeastern University in Boston. “This was never just about opioids.”

States have received the federal funds for opioids primarily through two grants: State Targeted Response to the Opioid Crisis and State Opioid Response. The first grant, authorized by the 21st Century Cures Act, totaled $1 billion. The second pot of money, $1.4 billion (approved as part of last year’s omnibus spending bill), sets aside a portion of the funding for states with the most drug poisoning deaths.

For Ohio and Pennsylvania, the need was great. Nearly 4,300 and 2,550 residents, respectively, died from opioid-related overdoses in the two states in 2017. Ohio was awarded $137 million in grants; Pennsylvania, $138.1 million.

State officials say the federal money enabled them to invest significantly in programs like training medical providers on addiction, offering more points of access for treatment and providing interventions for special populations, such as pregnant women.

The grants also stipulate a minimum amount of money for every state, so even areas with reportedly low opioid-related overdose death rates now have considerable funds to combat the crisis. Arkansas, for example, reported 188 opioid-related deaths in 2017 and received $15.7 million from the federal government.

Statistics show 2,199 people in California died from opioid-related causes in 2017, though its opioid death rate was one of the 10 lowest in the country. The Golden State received $195.8 million in funding — more than any other state.

“This funding is dedicated to opioids,” said Marlies Perez, a division chief at the California Department of Health Care Services, “but we’re not blindly just building a system dedicated just to opioids.”

Mounting evidence points to a worrisome rise in methamphetamine use nationally. The presence of cheap, purer forms of meth in the drug market coupled with a decline in opioid availability has fueled the stimulant’s popularity.

The number of drug overdose deaths involving meth tripled from 2011 to 2016, the CDC reports.

And hospitalizations involving amphetamines — the class of stimulants that includes methamphetamine — are spiking.

The problem of meth addiction is hard to address, doctors say. Treatment options for this addiction are narrower than the array available for opioids. In light of the increase in deaths related to other substances, are these restricted grants the best way to fund states’ response to opioids?

Bertha Madras, a professor of psychobiology at Harvard Medical School and a former member of the President’s Commission on Combating Drug Addiction and the Opioid Crisis, says the federal government has responded well by tailoring its response to opioids because those drugs continue to kill tens of thousands of Americans per year.

However, Madras adds, as more people living with addiction are identified and other drugs rise in popularity, the nation’s focus will need to change.

Beletsky emphasizes that the grants are insufficient to support fixes to the mental health care system, which must respond to patients living with an addiction of any kind.

People addicted to a particular substance typically use other drugs as well. Controlling addiction throughout a person’s life can be akin to playing whack-a-mole, says Dr. Paul Earley, president of the American Society of Addiction Medicine, because they may stop using one substance only to abuse another.

But specific addictions may also require specific treatments that cannot be addressed with tools molded for opioids, addiction specialists say, and the appropriate treatment may not be as available.

“I think we have to really begin to self-examine why this country has so much substance use to begin with,” Madras says.

Kaiser Health News is a nonprofit, editorially independent program of the Kaiser Family Foundation, and is not affiliated with Kaiser Permanente.