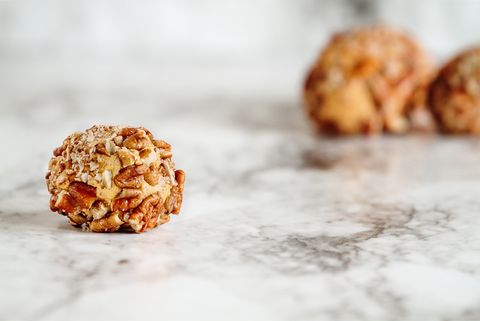 While carbs may be the most easily-accessible fuel for powering your runs, fat plays an equally important role in fueling the miles. Once you’ve burned through all your stored energy from carbs (which, FYI, is only about two hours worth for most people), your body turns to its nearly unlimited fat resources for more energy. Translation: You need healthy fats to run further.

Some runners have turned to low-carb, high-fat diets like keto to train their body to burn fats more efficiently. Quick refresher: The keto diet severely restricts carbs to just five percent of your daily calories, with around 75 percent of the rest coming from fat and 20 percent from protein. That puts your body in a state called ketosis, which burns more fat. “Since your body can rely on fat for fuel rather than carbohydrates, you’ll be able to sustain your energy longer on a long run without things like gels or gummies (because your body can pull from body fat stores),” says Samantha Presicci, a registered dietitian at Snap Kitchen and a certified personal trainer.

But consuming that much fat on the reg is actually kind of hard. And that’s why keto devotees swear by “fat bombs,” snacks packed with high-fat ingredients like coconut oil and full-fat dairy. “Fat bombs are as close to 100 percent fat as possible, with very little protein or carbs,” explains Tara Garrison, a NASM-certified personal trainer and keto diet specialist. “Each fat bomb should be 85 to 100 percent fat, 0 to 10 perecent protein, and 0 to 10 percent carbs.”

Something called a “fat bomb” kind of sounds like a heart attack waiting to happen, but “don’t be scared away by ‘fat’ in the name,” says Presicci. “Healthy fats are crucial for everything from weight loss to hormone health, and can be a great option for a quick breakfast or on-the-go snack—since they typically have a higher fat content and often have fiber (from things like nuts or chia seeds), they tend to be a filling, nutrient-dense option.”

We’ve been trained to think that fat = bad, but, whether they’re part of a high-fat, low-carb diet or not, fat bombs can be healthy and effective. “Fat bombs can be an awesome option for a pre-workout snack or an on-the-go snack because they can help balance your blood sugar, which is often inconsistent or high on a higher carb diet,” says Presicci.

But you have to be smart about choosing good-for-you fats. “Good fats include coconut oil, MCT oil, grass-fed butter or ghee, nut butters, cocoa butter, heavy cream, avocado or avocado oil, olives or olive oil, sesame seeds or sesame seed oil, chia seeds, flax seeds, and walnuts,” says Garrison. “Avoid the ‘yellow oils,’ a.k.a. industrial seed oils, such as canola, soybean oil, and vegetable oil, which are chock-full of toxic byproducts and highly inflammatory, and steer clear of cheese-based fat bombs as well, which can be inflammatory for many people and raise LDL, the less desirable cholesterol.”

Whether you’re a keto devotee or not, keep in mind that these fat-packed snacks aren’t meant to replace more nutrient-dense meals, says Presicci. “Fat bombs should be something you use around your training or when you’re in a bind on-the-go,” she adds.

“Generally, one to three per day will be sufficient,” says Garrison. “You want to give the body enough fat to operate at its full capacity, but, like anything, too much of a good thing can be a bad thing.” Fat bombs aren’t particularly calorie-dense (they typically contain 100 to 200 calories, depending on ingredients), but if you’re trying to keep your weight in check, portion control is key—especially since these are basically equivalent to dessert in keto world.

And before you go buying up all the coconut oil and saving every no-bake fat bomb recipe on Pinterest, know that the verdict is still out on whether the keto diet is helpful or not for runners. Following the diet improved body composition and well-being but not performance in one study of five endurance athletes; another found that eight athletes on the diet saw a decline in running speed and power.

[Build a killer midsection in the kitchen for powerful, effortless miles on the road with Eat for Abs.]

Despite the hype around the keto diet—and all the buzzwords, like fat bombs, that come with it—there’s just not enough definitive data to show, well, anything, really. If you’re aiming for a PR on the sooner side, you’re better off sticking with what you know and saving the fat bombs for a quickie snack rather than a diet staple.